What time is it?

Folks who are following my blog

Some of the Blogs I Read

More about me than you want to know

I realized I haven't been here in several months. It's been busy at work. My responsibilities with the Church have been keeping me busy. And...I just haven't had much to say.

So, here is what I'm supporting these days:
1. I support Arizona and their efforts to rein in the problems they are having with illegal immigration.
2. I support term limits for Congress Critters. Two terms and out is what I think it should be. And no, I don't want any of them having "seniority".
3. I believe and hope President Obama will be a 1-term president. I'm certainly going to vote against him.
4. I support tax cuts, and don't for a minute believe we could ever "spend our way out of debt".

I haven't touched this blog since November, and now it's March. Lots has gone on. I've changed jobs, and now work for the government. yes, I'm part of the problem.

I left the company I was working for because I saw that the contract was going to end, and probably not be renewed, even though my boss was sure it would be. I'm sorry to say I was right. Today, I found out that his bosses knew well in advance that there would be no follow up contract (the govt. was required to tell them), but they chose not to tell the local management. Nice....

Most are landing on their feet and are starting new jobs right away, but there are several who have no job offers out there yet, and may have to relocate. In most cases, I'm sorry to see it, since they are good workers and good folks. There are a few who I don't feel particularly sorry for, and I'll leave it at that.

Perhaps, as I get more into the new job, I'll share some thoughts about it, but not yet.

I almost forgot...Pres. Obama should be impeached, and everyone who voted for "Health Care Reform" should be voted out. Nuff said.
Posted by Bliss and Trish at 7:14 PM 1 comment:

So...should I keep maintaining this blog?

It seems Facebook is the thing to do now, so I find myself wondering if I want to keep this blog going.

If anyone is looking, make a comment, and let me know what your opinion is. I really do have stuff that I could post about...like my new On30 Climax with DCC and sound.....
Posted by Bliss and Trish at 12:08 PM 1 comment:

I've spent the last couple of weeks creating an Access 2007 database to emulate a database that was created some ten years ago. I've managed to get the important functionality working, and have created a pretty simple interface for our users.

It's interesting to use a tool that you aren't familiar with because ther is always so much to learn. I've spent an incredible amount of time with my nose in various books or digging around online. The entire experience has been a lot of fun, and if you have been avoiding using a new tool, as I was, I'd recommend it as a fun exercise!
Posted by Bliss and Trish at 12:32 PM 1 comment:

The porch light is off, the candy is (mostly) gone, and Halloween is mostly over. I hope everyone had a great one!
Posted by Bliss and Trish at 7:03 PM 1 comment:

I know I said I'd write about some thing different, but I have to announce that the bathroom remodel that wouldn't end has finally ended! I still need to put the trim around the door, but that's all. The shower is in, the towel rack is mounted, and there is TP! 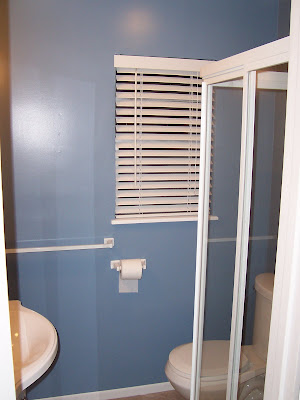 Here you can see a corner of the shower, the sink, and the toilet. 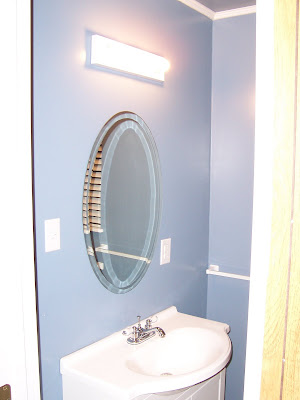 This is the sink and mirror. 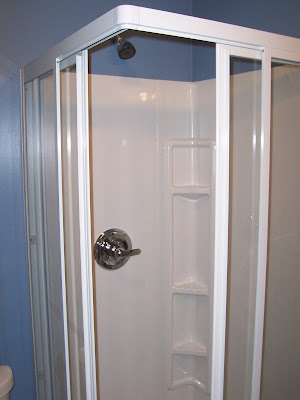 This is the shower.

Now that it's done, I'll shut up about it and get back to model railroading.
Posted by Bliss and Trish at 6:58 PM 1 comment:

About time I posted something...

Well, it's been a while, but then I've been busy. The bathroom is coming along well, so that is where we'll start. 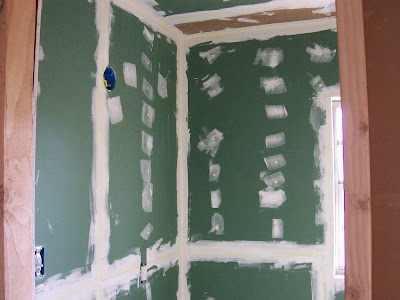 By the end of August, I got the sheetrock up, taped, and mudded. This is a picture of what the sink area looked like. 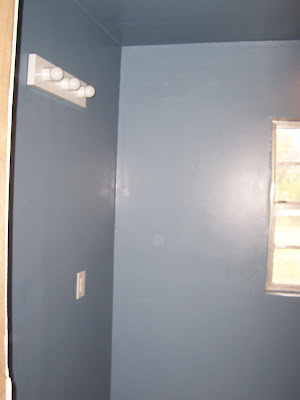 By the 8th of September, the bathroom had been given a coat of blue paint, and I was cleaning up some details.

I realized that the opening for a pocket door, which is what was used previously, is 2 inches highr than the opening for a regular door, so had to add a 2X4 and then sheetrock it. Of course, there were complications, but it's done. 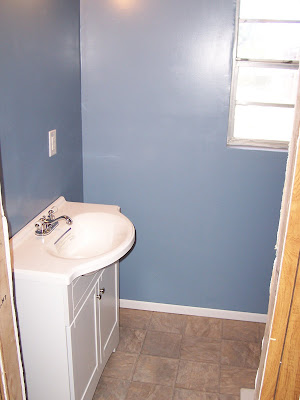 Here is what the bathroom looks like now. The sink is in place, though the plumbing isn't hooked up yet (I'm going to that when I put in the toilet). The shower base is set, and the toilet ring is plumbed in. I've got white molding around the top of the bathroom, and am about to put in the base molding (it has to be done before I put the toilet in).

I'll try to post about something else next time, since I'm sure anyone who happens to read this is probably tired of hearing about my bathroom!
Posted by Bliss and Trish at 6:55 PM 1 comment: